The woman who wrote the book on advertising to women.

Bec Brideson’s sweetness has always been mistaken by the patriarchy as a weakness. Nothing could be further from the truth. The Advertising industry has rarely seen such a ruthless warrior queen.

And she’s only just begun.

“Only 1% of the world’s government and procurement budgets go to female-owned businesses. I’m going to change that.”

Her new project ‘Women With Agency’ is born out of her hard-earned experience.

In 2004, she opened Australia’s first specialist marketing to women agency – Venus, which achieved massive success with 30 staff. Over the next eleven years her team slowly dwindled as progressive feminist clients were replaced by the ‘lean in’ generation.

Frustrated and facing massive financial challenges, Bec didn’t give in. She rebuilt. Knowing that women make 85% of all purchasing decisions made her more determined than ever to ensure their spending power was understood and taken seriously.​

So she wrote the book on it. In 2015 she was the first Australian woman to speak on the main stage at Cannes. 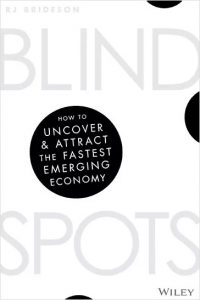 But it didn’t bring her fame and fortune. Those who serve the patriarchy branded her as ‘bitter’.

Unfortunately, Bec’s career story is well known, but one she can’t tell in full. She wears the guarded and fearful expression of a woman who has been silenced. Which is heartbreaking to us who have heard her story in whispers from those who witnessed the attempted destruction of a distractingly beautiful, disruptive woman.

“Only 2% of the world’s venture capital goes to women. It really is time to kick them in the balls.”

She says with her tongue planted well in her cheek.

Her campaign for the Women’s Australian Football league got together some of Australia’s most remarkable women, written with advertising legend Jane Caro and starring the irrepressible Lee Lee Chin – Bec told it like it is and always bloody should be!​

Because the last thing Bec Brideson is is bitter. She’s the ultimate optimist stridently using her voice to build a better deal for women.