We’re so out of Vogue

First of all, we are not in the pages of Vogue. It is an advertising supplement produced by L’Oréal.

Don’t get us wrong, we love Jane Fonda, an 81 year-old woman who looks amazing. But we know it’s a feat only attained by Hollywood royalty (surgery, stylists, trainers, chefs, beauticians, make-up artists, hairdressers and retouchers). Jane openly admits to it all. She knows her audience.

We’ve grown up with her she’s like our cool and beautiful best friend, we know we’ve never looked as good as her and we’re totally fine with that.

It hasn’t been for lack of trying. There’s barely a woman over 50 who hasn’t at least attempted a Jane Fonda workout. She’s never bullshitted us – looking that good is a LOT of hard work. Some of us still put in the hard yards. But those of us who produce endorphins in other ways have decidedly slacked off.

Yet L’Oréal think we want a youth-activating serum.

What? Go back to a time where they made white girls feel bad because we weren’t as perfect as Barbarella? 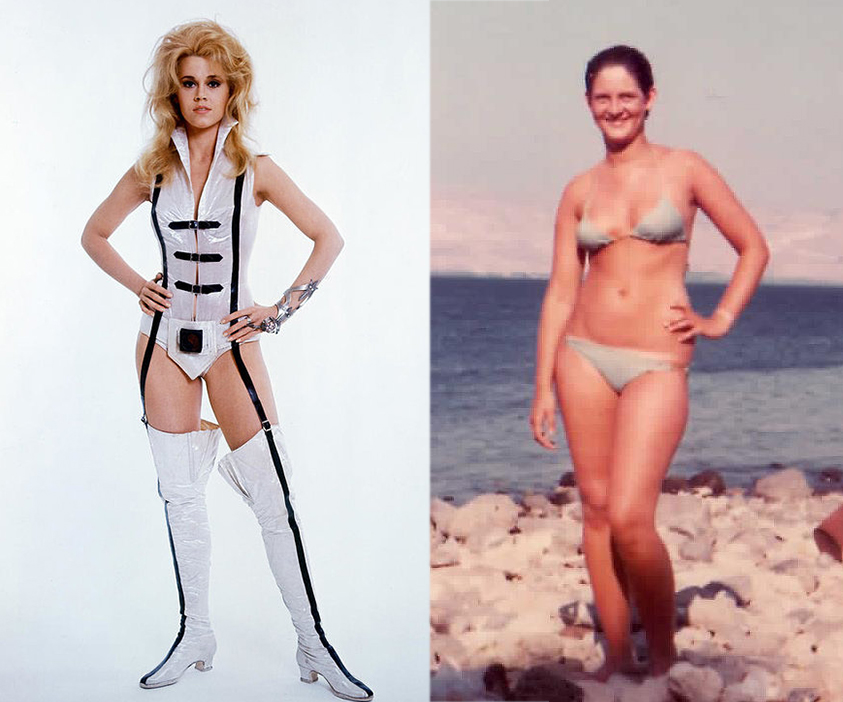 That’s me at 17. Even now when I look at this pic I can still remember looking at it as a teenager and seeing nothing but my enormous thighs. The beauty industry’s hatred of normal was so prevalent their messages spread into real life. I was called ‘a big girl’ and ‘thunder thighs’, told my jaw line was too soft, and my favourite old chestnut, “If you lost a stone you’d be beautiful.”

And that was just from men I slept with.

I wasn’t alone. I was surrounded by brilliant young career women doing amazing things from nine to five who were just as powerful and talented as Ms Fonda.

But it was a different story for the women behind the camera. Stories that played out in quiet. In tears. In the bathroom. You know, things like brilliant young producers throwing up expensive lunches because the creative boys thought her naturally wobbly thighs were hilarious.

We pretty much all hated something about ourselves. But only a tiny bit. And we tried to do something about it. In our young womanhood we bought creams to get rid of cellulite, lift our boobs and ward off those dreaded laughter lines.

NONE OF THEM WORKED.

Now they want to keep selling to us. Are we going to keep on buying?

Apparently, most facelifts are carried out on women in their forties, when those ‘terrifying’ laughter lines start appearing. By the time a woman hits her fifties she realises the enormity of the job ahead trying to ward off the inevitable. She knows the only way to try to look ten years younger is to spend a fortune and face a lot of pain.

She also knows she won’t really look ten years younger – just rich enough to be nipped, tucked and have her.face burnt off.

And we all know if you have that sort of work you can afford the latest ‘bee sting serum regime from the foothills of the Andes’ that’s peddled post surgery.

Not a £25.99 cream on the top shelf of the beauty aisle at Sainsbury’s.

So stop with the snake oil salesmanship and start affording us the respect you show our daughters who you empower and portray realistically.

After all, we took all our anger at your projections and deceptions and educated the next generation of women to define their own standards of beauty. They have forced you to show young women of colour, women of size, trans women, disabled women, sports women, and women with brains.

But you’re still trying to scare the shit out of them about ageing.

Which is ridiculous because it’s going to happen. And for many of us it’s the best time of our lives and something for younger women to look forward to.

Now they want to sell to us again, isn’t it time the big cosmetic companies gave us a break from the impossible expectations and show us as the powerful, creative, intelligent, forthright, controversial, and time-marked women we are?

Not just the leading feminist on your cover. A woman we look up to and admire. A general in Gloria Steinem’s army of grey-haired women.

We know she’s laughing all the way to the bank – she deserves it, she’s worked hard enough (she spent most of the 80’s jumping up and down in leg warmers FFS!) We love her and we’ll buy a magazine with her on the cover because we want to hear what she has to say. We know her unbelievable good looks are the result of great genes and a lot of work. We also know all L’Oréal contributed was a big healthy cheque.

Oh, and we all watch her show.

In Frankie and Grace, Jane runs a small independent cosmetic company that constantly runs up against the corporates.

I know all about this, Revlon was the biggest client of my agency for many years. I remember once an amazing new independent cosmetic line was launching that had brilliant packaging, was eco-friendly and a great product with a really cool ad campaign. I asked my client if he was worried, he said “Until they have a 50million ad budget I’m not in the slightest bit concerned.”

That was early this century. Now you you can build an audience on a shoestring. With the right message and product you can get the same exposure as a Vogue supplement. You don’t even need to be in Sainsbury’s to sell it anymore.

There are lots of smaller companies popping up that have formulated products designed to enhance the ageing process not deny its existence. Clever marketers who show beautiful older women realistically with messages to enhance our confidence not encourage us to criticise our reflections.

Companies that take selling to the most powerful consumer group on the planet seriously. If the big cosmetic companies want to compete I suggest they forget this ‘youthful’ folly and celebrate our wisdom.

It’s not us who need to Reset. Revitalise. Renew.