Where are the weirdos in advertising? 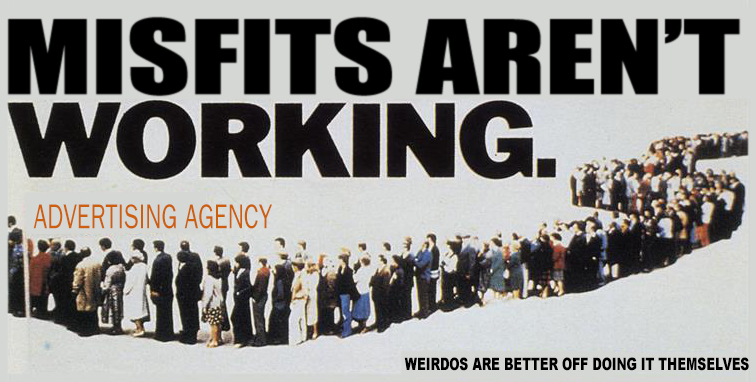 Where are the weirdos in advertising?

There is a legend that after Saatchi and Saatchi presented their famous ‘Labour isn’t working’ campaign, Margaret Thatcher mused, Why are the cleverest people in Britain selling soup?

I suspect this is a legend Dominic Cummings knew of when he went searching the industry for his new team. Alas, like great political campaign slogans like ‘Labour isn’t working’, you won’t find many misfits and weirdos in creative departments these days.

Another Saatchi legend of the time tells of a suit who would grab a chair when taking clients on an agency visit, when they reached the creative department he would hold it out in front of him like a lion tamer going into a cage. These days most agency creative departments aren’t scary, truly diverse, or even have a door. They are blank spaces filled with rows and rows of exhausted and affluent young people searching for ideas online too frightened to fight for their concepts for fear of losing a job they had to fight tooth and nail to get in the first place.

Creatives used to be valued and feared. Today they live in terror. This article,

The cleverest people in Britain will never work for people who don’t care about them. And we’d never, ever sell our granny to get an ad on the telly. Advertising has lost its misfits and weirdos because it’s lost its humanity.

I started my career with a disabled black copywriter from a council high rise. I was the first young woman in a creative department. Neither of us would have been there without a free education (the only school fees my parents were prepared to pay for was an exclusive Swiss finishing school to find a rich husband). So even the white middle-class ‘nice girls’ who entered the industry were out and out rebels.

And it wasn’t that hard to get in. You just needed a kick-arse portfolio, which was easy when all the creative leaders of the industry made the time to encourage and teach young talent (probably because they didn’t spend their whole lives in nonsensical meetings). They hired us on our potential. We didn’t need two years working for free, we just needed ‘It”.

For me it is an ability to see the world from a different perspective and tell the story of what you see. John Nash the mathematician and subject of the film ‘A Brilliant Mind’ had a creative process that was described by a colleague as, âEveryone else would climb a peak by looking for a path somewhere on the mountain, Nash would climb another mountain altogether and from a distant peak would shine a searchlight back on the first peak.â

Cummings doesn’t know he needs mountain climbers. He doesn’t even know who we are.

In his blog he says he’s looking for; weirdos from William Gibson novels like that girl hired by

No true creative works under the whip of anyone. We need the time, space and freedom to climb the mountains of our choice.

Especially now we’re facing the biggest communication challenge the world has ever seen.

We are in the age of chaos, with

We need to burst their bubble.

Creatives steeped in the ways of propaganda can see exactly how human desires are being manipulated to give us everything humanity shouldn’t want. We’ve been doing it for years. But now instead of making women desire eternal youth with a skin cream, or persuading men to buy deodorant to increase their sex appeal, we’ve got to start selling a world where we’re not all being divided for the 1% to conquer.

Dominic and Boris, Trump and Putin want us on their side. But advertising should be on another level entirely. Especially when we hold the ammunition. Consumer spending is the most important factor in every country’s economy. When political factions use media to confuse us, we should bombard it all with ideas that bring us all together. Because left or right, black or white, male or female, millennial or boomer we all buy the same things.

There have been discussions for decades about whether advertising leads culture or follows it. Who cares? It’s time to bloody lead!

Because ad creatives know how to change people’s minds while telling the truth. If you say At 60 miles an hour the loudest noise in the new Rolls-Royce comes from the electric clock you’d better have decibel readings to back it up.

But more than that, brands are the only chance we’ve got of moving past the chaos and political nonsense by bringing all the opposing groups together over the things that really unite us – you know like a beer or a nice cup of tea.

And of course, I’m dreaming that advertising can save the world.

The soup sellers left agencies years ago. They’re all in the startup ecosystem.

But while Dominic’s leading his group of weirdos and misfits up his tried and tested path of fear-mongering and ridiculous work hours, who’s up for a mountaineering expedition to shine a light on a better world?